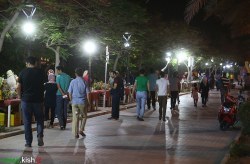 According to the Public Relations and International Affairs Department of Kish Free Zone Organization, the event which was held on Thursday, May 26 and Thursday, June 2, aimed at creating a jubilant environment for tourists visiting Kish as well as the residents of the Persian Gulf Island.

The event was held on the sidewalk next to the City Hall.

A 30-meter canvas was installed in the area on which adults, teenagers, and even children created their own works of art with two topics introduced as the themes of the weekly painting event. Also, separate canvases were available for the skilled artists taking part in the street painting festival.

30 adult artists and up to 20 child artists taking part in the event were awarded valuable prizes.