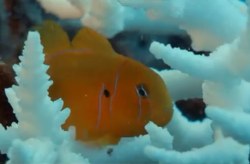 Twenty Lives in Depths of Persian Gulf Premieres in Kish

Kish Island, November 14, 2022- The documentary “Twenty Lives in the Depths of the Persian Gulf” by Kazem Bayram Bakhsh will have its premiere at Kish International Conference Center this week.

According to the Public Relations and International Affairs Department of Kish Free Zone Organization, on the occasion of Kish Week, the documentary “Twenty Lives in the Depths of the Persian Gulf” will be displayed on Tuesday, November16, from 19:00 to 22:00 at the Persian Gulf Hall of Kish International Conference Center.”

In this documentary and in short segments of a few minutes, the living conditions of underwater marine creatures in the Persian Gulf is displayed, which is of interest to environmentalists, marine researchers, students, and other enthusiasts.

Stating that in this documentary, up-to-date cinematographic equipment and techniques have been used, Kazem Bayram Bakhsh, the producer and director of this documentary, emphasized that clear, cinematic quality images accompanied by the scientific language and voice of Dawood, the representative of our country's leading voice actor is among the features of this documentary.

Kazem Bayram Bakhsh, the Iranian international documentary maker, hailed Kish Free Zone organization’s serious attention to the environment and expressed hope that the interest of the tourists and residents of Kish to preserve the valuable environment of this beautiful coral island, will lead to the good performance of this free zone in terms of preserving the marine species including corals and turtles.