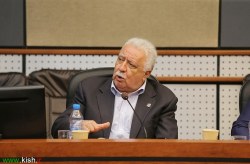 According to the Public Relations and International Affairs Department of Kish Free Zone Organization, in the meeting of Kish Investors and Entrepreneurs' Association with interim CEO of KFZO, Mohammad Haghirian, a businessman and international activist, referred to the problems and difficulties caused by non-observance of the primary laws of free zones on all areas of the island and said: 90% of Iran's spare parts used to be supplied from Kish. In 1995, when Kish was legalized, and permissions to sell land and constructions were issued, people even waited for four months for a ticket to travel to Kish.

He added: "The development of Kish is due to the efforts of investors and entrepreneurs, and now some of them are getting bankrupt due to ignoring some cases and lack of necessary support."

Mohammad Haghirian stated: foreign trade barriers, lack of international flights, currency fluctuations, and investor problems in the implementation of the plan and many other cases show that the position of the private sector has been neglected, and the investor has no hope to continue, so the government should help us instead of creating obstacles in the way of free zones.

He said that the members of the Association of Investors and Entrepreneurs in all areas of Kish have joined hands and spent their lives to develop Kish until Kish came into the present status, adding: "The passivity of the international sector will cause severe damage to us, and this must be reconsidered.

The activist of Kish International sector said: "We have some facilities in the field of international trade that we can introduce Kish in the international and global platform through embassies so that we will look for the causes and challenges and I hope we can Provide reasonable solutions to protect the efforts of old investors and entrepreneurs in Kish. "