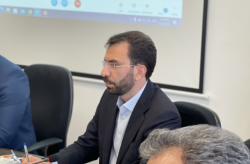 Kish Island, November 22, 2022- The meeting of the Tourism Commission of Iran Chamber of Commerce was held with the presence of Mehdi Keshavarz, the CEO of Kish Free Zone Organization.

According to the Public Relations and International Affairs Department of Kish Free Zone Organization, Mehdi Keshavarz said to the members of the Tourism Commission of Iran Chamber of Commerce: "The development process in Kish has not been balanced for many years, and therefore we are witnessing a situation that requires a non-stop scientific effort to compensate for it with the comprehensive support of external institutions."

Emphasizing the completion of the Kish tourism infrastructure, Keshavarz added: Is it possible to invest in the construction of so many hotels on Kish Island, but we still have to deal with infrastructure problems such as water, electricity, and sewage on this island?

The CEO of Kish Free Zone Organization further said: With the opening of the new Kish airport terminal as the smartest airport in the country, the completion of the southern runway of Kish airport, the construction of the second sewage module in the south of the island, and also the design of a comprehensive tourism map of Kish island, soon we will witness the development in the hardware and software fields of tourism on this island.

Keshavarz further added: It is time to distance ourselves from mass tourism and try to design and take some measures to attract tourists to overcome seasonality in tourism even during the off-season focusing on the role of the private sector, focusing on the implementation of resistance economy policies.

In the end, while inviting the members of the Tourism Commission of Iran Chamber of Commerce to visit the new tourism infrastructure of Kish Island, he said: Fortunately, the private sector of Kish Island is a capable, committed, and caring sector. Wherever the private sector is trusted, we have witnessed economic dynamism and vitality in different parts of the country.