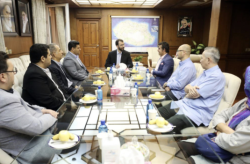 Kish Island, November 26, 2022- With the significant development and progress of the island's sports infrastructure and the agreement with the Ministry of Sports and Youth, Kish will host the 10th edition of the Asian Deaf Games 2024 for the first time in the country.

According to the Public Relations and International Affairs Department of Kish Free Zone Organization, the second meeting of the Asian Deaf Games 2024 was held in Kish Free Zone Organization on Thursday, November 24, with the presence of Mehdi Keshavarz, the CEO of Kish Free Zone Organization, Mohammad Pargar, the President of the Asia Pacific Deaf Sports Confederation, APDSC Secretary-General, Enkhbayar.J., and APDSC Treasurer, Lim Heng Tuck, the accompanying delegation and some KFZO officials. The focus of the meeting was on "drafting a written program, supporting the competitions, checking transportation, ceremonies, welfare amenities, accommodation facilities, entertainment, shopping and tourism in various fields, media coverage on a wide level."

While expressing his satisfaction with the holding of this meeting and emphasizing the continuation of the meetings, Keshavarz called the support of holding this big event at the Asian level more important than holding competitions and said: "All issues should be examined and predicted before holding this event so that the athletes do not have anything to worry about except the game."

"With the formulation of the strategic plan and the selection of the project manager, the issues raised in the brainstorming sessions will be seriously investigated and followed up," Keshavarz stated.

He stated that Kish Free Zone Organization is in charge of implementing this great event at the Asian level. He will personally attend the meetings, adding: "The requirement to properly hold the first Asian Games at this level with the presence of 35 countries requires universal cohesion, double effort, round-the-clock work and cooperation of sports federations."

Regarding the participation of more than 2,000 athletes in the Asian Deaf Games, Mehdi Keshavarz said: "Considering the fans of the participating teams in this event, Kish Island should be prepared to host more than 10 thousand incoming travelers to the island."

The Chairman of Kish Free Zone Organization emphasized that the KFZO's approach is centered on the Islamic Republic of Iran Airlines, i.e., all the airlines, and stated: Political and executive level negotiations are being conducted with countries such as "Turkey, UAE, Qatar, Oman" so that we can adequately host the 10th Asian Deaf Games at the national level for the first time.

Mehdi Keshavarz stated: "Dubai, Doha, and Oman" direct flights will be launched within the next three months, and the cargo flight has also started operating from Istanbul."

Stating that Kish Island has significant capacities in the field of sports, Keshavarz said: We plan to turn Kish into a sports island; therefore, many targeted efforts have been made in this field since the beginning of the year.

After eight months and for the first time, Kish Island has become the center of two "Marine, Coastal and Sailing" sports federations. "he pointed out.

Referring to Kish Olympic Sports Complex, which is under development, the CEO of Kish Free Zone Organization added: "With the approval of the Minister of Sports and Youth, the second Olympic Academy will be built in Kish within the next two years."

According to Mehdi Keshavarz, all the preparation exercises of the national teams are held inside the island, and it is a source of pride for Kish Free Zone Organization that we are hosting an influential and significant group in the Asian Deaf Games.

Also, since last month, the CEO of Kish Free Zone Organization has issued an order to accelerate the completion of infrastructure, and the infrastructure activities will be completed before the end of next year and the beginning of 2024.