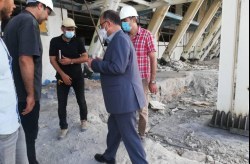 Noting that the completion of unfinished projects in the year of "production, support, and barriers" is one of the most important priorities of Kish Free Zone Organization, he added: "Given that tourism is the main focus of activities on Kish Island, the construction of a new airport terminal to increase the number of tourists and improve the quality of services has a vital role in the development of the region's tourism industry.

He described the completion of Kish International Airport terminal as one of the critical demands of Kish residents', " The operation of this terminal is one of our missions, and we will do our best to achieve this goal.", he added.