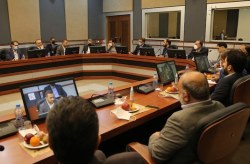 Turkish Hotel to Be Constructed on Kish Island

Kish Island, December 13, 2021-After reviewing the Construction Proposal of a 5-star hotel with 1000 rooms and over 2000 bed capacity, the economic and touristic outlook of the island will develop significantly.

According to the Public Relations and International Affairs Department of Kish Free Zone Organization, regarding the construction of a 5-star hotel with a Turkish brand on Kish Island, in a meeting held at Kish International Conventions Centre, Kharazmi Hall, with the CEO and owner of Iran Air Tour, the accompanying delegation, and KFZO officials on December 13 Mohammad Reza Lavasani, the head of Kish Free Zone Organization said: "In this period, we need more cooperation with Iran Airtour, which will lead to a boom in tourism on the island."

Noting that after reviewing the proposal to build a 5-star hotel with a Turkish brand, and with the increase the number of flights by Iran Airtour, we can take another step in reducing the price of plane tickets to Kish, Lavasani stated: "Kish Island, as a quiet, safe region with a favorable climate, strong leisure dynamics and an established tourism infrastructure, is an ideal tourist destination for many travelers from all over the country."

He said: "The supportive role of Iran Airtour is significant for the prosperity of tourism in Kish Free Zone, and we can also consider the flight route from Najaf to Kish to develop Islamic tourism."

Kish residents can invite friends or family for a short visit to Kish during the low seasons, offering discounts.

The head of Kish Free Zone Organization noted: "With the cooperation of hotels and airlines, the tariffs can be reduced or maximum discounts offered to lure the guests into traveling to Kish during low seasons.

Majid Shekari, the CEO and owner of Iran Airtur, said:" We have had the highest domestic passenger number for two consecutive years. We are still the first domestic flight in Iran by providing services to more than 2 million passengers.

"Last week, the company won a certificate from the European Union to start flights to London and Manchester next month," Shekari said.

Regarding the plan to build a 5-star hotel with all tourist facilities in the Kolbeh-e-Hoor area, he said: "After reviewing the plan by Kish Free Zone Organization, this hotel will be located on a 100,000 square meter land, 1,000 rooms and 2,500 beds with an investment of 100 million euros."

According to Majid Shekari, the hotel staff will be hired from Kish residents and managers from Turkey.

It is worth mentioning that Airtour is the first airline in terms of quality of services in airports and aviation in the country.