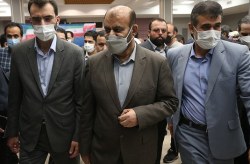 According to the Public Relations and International Affairs Department of Kish Free Zone Organization,  considering the importance of the role of Kish Island in properly hosting 2022 World Cup football fans in Qatar and establishing a constructive interaction with that country; the Minister of Roads and Urban Development of Iran, Rostam Ghasemi, arrived on Kish Island on Saturday evening, April 10, together with the ambassador of the Qatari government in Tehran.

Speaking on arrival in Kish Island in southern Iran on Sunday, Rostam Qasemi said that Iran's President Ebrahim Raisi had the issue on the agenda during his visit to Qatar earlier this year.

Iran's support will include providing residence and air and maritime transportation for passengers and tourists destined for Qatar according to agreements between Raisi and Qatar's Emir, Qasemi said.

Qatar's Ambassador to Iran, Mohammad bin Hamad al-Hajari arrived on the island in the company of the Iranian minister.

Also, on this trip, Saeed Mohammad, Advisor to the President and Secretary of the Supreme Council of Free Trade-Industrial and Special Economic Zones, will host Iranian and Qatari delegations to introduce the capacities and potentials of Kish Free Zone and visit the tourism and transportation infrastructure of this region.

Climatic similarity and the short distance of Kish Island from Qatar, sports facilities, accommodation, visa-free travel, the announcement of the readiness of the private sector to invest, and also the location of Kish Island as the country's maritime hub in the sports sector, has made Kish an important tourist destination in this critical event.

Due to the proper capacities of  Kish Free Zone to hold training camps for football teams and the proper introduction of tourist and accommodation attractions with the cooperation of the Ministry of Sports and Youth, Football Federation, and Cultural Heritage and Tourism, practical steps can be taken in this regard.