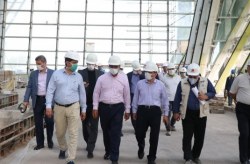 According to the Public Relations and International Affairs Department of Kish Free Zone Organization, Dr. Mozaffari made the comments during a visit to the Kish International Airport terminal project along with a number of KFZO officials.

"With changes in the Kish Airport terminal project and the increase in the number of jet bridges, each of which can board and deboard two airline passengers simultaneously, the airport's passenger capacity will increase from 3 to 6 million.", he reiterated.

"By concluding a contract with an Iranian Knowledge enterprise, the first jet bridge entered the Kish International Airport terminal project." Dr. Mozaffari added and said: "based on this contract, we have increased the number of jet bridges from 5 to 10, and these bridges will be installed in the Kish International Airport terminal project every two weeks."

For his part, Dr. Mostafa Khanzadi, KFZO Deputy for Urban and Infrastructure Affairs, stated that this project will be realized in the form of two contracts and said: "In the first contract, an amount of 260 billion tomans was spent on this project, and in the second contract, considering the price changes, it has been estimated that € 17.5 million worth 94 billion tomans in Iranian currency would be spent, reaching upto 150 billion tomans."

Khanzadi stated that according to the contract, 5.5 billion tomans has been spent on each of the jet bridges. "Ten jet bridges amounting to 55 billion tomans were supplied by a domestic Knowledge enterprise, which would cost three times as much to buy from a foreign company," he said.

"Based on the catch-up plan, this project will be operational in March next year," KFZO Deputy added.

Mostafa Khanzadi also stressed that the transportation of passengers and freight cargo through Kish International Airport would contribute to providing outstanding capabilities to the mainland and neighboring countries.