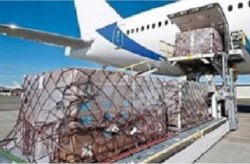 Kish Island, November 29, 2022- The second cargo flight from Istanbul to Kish Island will take place on Tuesday, December 15, with the support of Kish Free Zone’s business people, traders, and merchants.

With the support of business people and marketers of the island, the second cargo flight from Istanbul will land at Kish International Airport on Tuesday, December 6.

It should be noted that this flight is carried out by Meraj Airlines to expand and facilitate air cargo services.

Also, the establishment of this flight is in line with the welfare of Kish residents, bazaars, and merchants and for the region's economic prosperity, and its continuation will depend on their support.