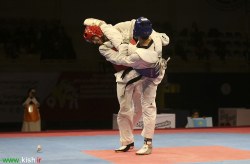 According to the Public Relations and International Affairs Department of Kish Free Zone Organization, following the successful holding of the Asian Taekwondo Club, Fajr Open Tournament, and World Taekwondo President's Cup in 2019 due to the favorable conditions of Kish Island, in a preparation meeting of the officials of the Taekwondo Federation with Mohammad Taghi Amiri Khorasani, head of Kish Institute of Sport and Recreation, the hosting of the events in 2020 was also handed over to Kish Island.