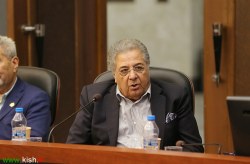 Kish Attractions Must Increase Every Day

According to the Public Relations and International Affairs Department of Kish Free Zone Organization, in the meeting of Kish Investors and Entrepreneurs' Association with Dr. Lavasani, KFZO interim CEO, Nouri, one of the investors of the island, while expressing hope for good things to happen in the future and wishing for the economic prosperity of this free zone, cited the issue of sanctions and import bans as significant problems for marketers and said:

"Kish Free Zone Organization always cooperates with traders and merchants in the commercial sector. Still, unfortunately, laws such as banning the import of cars in Kish have been created, leading to more extensive problems."

Nouri called the capacity of Kish Island to attract capital, stable income, and all-round prosperity very desirable, stating that the attractiveness of this free zone should be increasing every day: "According to the law, the estimated useful life of cars on Kish Island is ten years and using them more than this period will cause pollution and create an ugly face for the city, so I ask the authorities to allow the minimum import of cars to Kish Island, which has no road connections to the mainland."

He referred to the post-war (Iran–Iraq) financial events, in which goods were sold through the people's capital, and called for the elimination of incorrect laws and the removal of unprofessional comments as barriers to business.