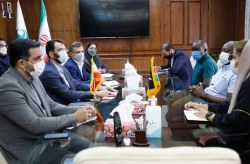 Kish Island, April 19, 2022-Mehdi Keshavarz has announced that Kish Institute of Science and Technology is ready to sign an agreement with the House of Innovation and Technology in the capital of the Republic of Kenya.

According to the Public Relations and International Affairs Department of Kish Free Zone Organization, the Kenyan Ambassador to Iran, Joshua I. Gatimu, met with the KFZO managing director in Kish Island on Sunday afternoon to explore avenues for the expansion of bilateral ties between Kish Island and Kenya.

During the meeting, the director of Kish Free Zone Organization referred to the existing capacities on Kish Island, especially the readiness of Kish Institute of Science and Technology to conclude an agreement with the Nairobi House of Innovation and Technology, and stressed the need for cooperation between the two countries.

Regarding the visit of the Ambassador of the Republic of Kenya to the Kish tourism spots, Mehdi Keshavarz, stated: "We expect the friendly relations between the two countries in special areas of the economy, trade and especially tourism of Kish Island to be given special attention."

Stating that Kenya is the eastern gateway to the vast continent of Africa, the CEO of Kish Free Zone Organization said: "It is expected that with the friendly relations between the two countries, special attention will be given to economic, commercial, and especially tourism areas of Kish Island."

Keshavarz pointed out that starting any business has some difficulties, noting: "Given that good Kenyan companies in Iran and Iranian companies in Kenya have invested, the level of relations should be upgraded. "

Regarding the investment opportunities in "hoteling, water sports clubs, football fields" on Kish Island, KFZO Chairman said: "As Kenya is well-known in football and athletics, given the existing capacities on Kish Island, there can be some joint investments and cooperation."

"Kish Free Zone has the necessary infrastructures. If the conditions are provided, necessary follow-ups will be done to establish direct flights between Kish and Nairobi, which will pave the way for developing the commercial tourism industry or exchanging various Iranian products." Kish head said.

"There are capacities in Iran that, by creating joint exhibitions, we can introduce the two countries' capacities on a large scale. We hope this meeting will be the beginning of stabilizing and improving relations between the two countries," Keshavarz added.

Joshua I. Gatimu, for his part, hailed the tourist attractions on Kish Island and referred to the climatic and urban similarities between Kish and Mombasa as well as the Arab indigenous region in Mombasa. Mombasa, like Kish, is the country's tourist hub and an island by the vast sea with palm trees and coral reefs.

He said that the historic city of Harirah and the underground city of Kariz are unique attractions, adding that the war cannon in the town of Harirah, which used to be one of the Portuguese artillery pieces, reflects the shared historical experience of Kish and Kenya.

The Ambassador also referred to the sport of marathon as a good option for holding competitions between Iran and Kenya and expanding sports tourism.

It should be mentioned that in the meeting between the CEO of Kish Free Zone Organization and the Ambassador of the Republic of Kenya to Iran, Reza Shajie, Advisor and Acting Director of CEO's General Department, Hossein Hemmati, Deputy Director of Economic and Investment Affairs of Kish Free Zone Organization and Mohammad Javad Izadi, Representative of the Ministry of Foreign Affairs in Kish were present.