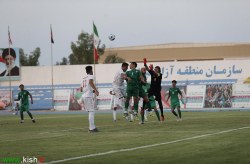 Kish Island, June 12, 2021- After defeating Iraq, Iran has become the champion of the 2022 Asia Pacific Deaf Football Olympic Qualifying Tournament to be held in Brazil.

According to the Public Relations and International Affairs Department of Kish Free Zone Organization, quoting from Sport and Recreation Institute, the final match of the qualifying competitions of the Asia and the Pacific was held between Iran and Iraq on Thursday at Kish Olympics stadium with Iran beating its traditional rival Iraq 3-2.

The national teams of Uzbekistan and South Korea also met simultaneously in the second sports field of Kish Olympics.

In these competitions, Iran became the champion, Iraq the runner-up, Uzbekistan, and Korea, the third and fourth teams, respectively, to qualify for the 2022 Olympics in Brazil.

The qualifying competitions of Asia Pacific deaf football kicked off on Wednesday, June 2, on Kish Island, with the top seven teams from Iran, South Korea, Thailand, Uzbekistan, Afghanistan, Iraq, and Malaysia in attendance.

2022 Deaf Football Olympic Qualifying tournament in the Asia Pacific region was held on Kish Island from June 1 to 11.