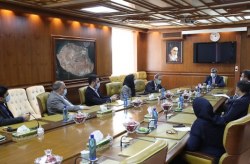 According to the Public Relations and International Affairs Department of Kish Free Zone Organization, the officials of a foreign investment company met with KFZO managing director, Dr. Gholam Hossein Mozaffari, and announced their readiness to cooperate with KFZO in financing development, exports, energy, and tourism projects.

The meeting was held on Tuesday, January 7, at Kish Free Zone Organization meeting hall. During the meeting, Gholam Hossein Mozaffari referred to Kish Island's significant capacities as Iran's tourism hub and said:" Investment projects on Kish Island will be operational after being reviewed in technical and specialized committees."

Emphasizing that Kish infrastructures have been prepared so that the best and latest development projects can be operational on Kish, he added," one of these projects called "Artificial Island" is presently on the agenda. The first stage will be implemented in an area of 60 hectares and can be extended up to 150 hectares."

He noted: "Holding 2022 FIFA World Cup in Qatar requires good coordination, and in this regard, a coordination committee has been formed in the Secretariat of the Supreme Council of Free Zones to manage the role of supporting these important events."

Mozaffari also stated that extensive advertisement of Kish Island's potentials in sports, tourism, and investment for foreign tourists are among the ideas that can achieve a desirable and effective result in the 2022 Qatar Matches.

He referred to the development of health tourism and the launch of maritime tourism as suitable capacities of Kish Island to attract tourists from different parts of the world and said: "The plans presented in this meeting can be implemented by determining their dimension and investment volume.

It is worth mentioning that investments in the areas of the axis of civilizations, sports tourism, construction of an island in the shape of a starfish, construction of a recreational pier with a width of 18 meters and a length of 500 meters in the form of BOT contracts and organizing prominent foreign airlines to establish flights to and from Kish were among the proposals made by the foreign company in this meeting.