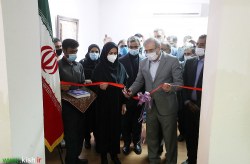 Establishing Women's Parliament, a Valuable and Fundamental Measure in Kish

Kish Island, September 8, 2020- The Secretary of the Supreme Council of Free Trade, Industrial and Special Economic Zones said: The establishment of the Women's Parliament is a precious infrastructural and social step valuing the position of Kish women's community.

According to the Public Relations and International Affairs Department of Kish Free Zone Organization, Morteza Bank made the comments at the opening ceremony of Kish Women's Parliament attended by the CEO and a number of KFZO officials. "This important and valuable social action should be spread as a model in the country, "he reiterated.

During the ceremony, Alemeh Khosravi, the head of Kish Women's Affairs Department, stated that Kish Women's Parliament has been formed by the order of the CEO of Kish Free Zone Organization and based on the population of women in this region.

The head of Kish Women's Affairs Department pointed to the style guide of the women's parliament, which has been compiled in the form of a roadmap based on the activities of the parliament. "After sending it to all different sections of the society and representatives, and collecting the comments and suggestions provided, this style guide has finally been approved by the CEO of Kish Free Zone Organization." She said.

It is worth mentioning that Kish Women's Parliament, in the form of an advisory assembly, examines and localizes the demands of the women of the society and presents them to the relevant institutions.