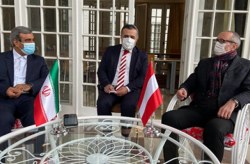 Austria Culture Week to Be Held on Kish

Kish Island, November 16, 2020-The second Austrian Culture Week will be held in March on the beautiful island of Kish.

The Chairman and CEO of Kish Free Zone Organization, while appreciating the Austrian Ambassador to Iran for his special attention to Kish Island, said: "The history of long-term cooperation between Iran and Austria creates a positive ground for the development of political, economic, social and cultural cooperation between the two countries".

Referring to the expansion of Iran's international relations, Gholam Hossein Mozaffari, said: "We hope that in the course of interactions with developed countries, great achievements will be made by the resilient nation of Iran." Moreover, due to the favorable weather conditions and appropriate infrastructure of Kish, we are ready for cooperation within the rules and legal frameworks.

"While preparing for the second Austrian Cultural Week on Kish Island in the New Year, observing strict social distancing and all the preventive measures for COVID-19, we hope to create the necessary grounds for Kish Culture Week in Vienna in the future."

Meanwhile, for his part, the Austrian Ambassador to Iran Stefan Scholz referred to 700 years of Iran, Austria cooperation and said that Austria has always been ready to develop relations with Iran. "We are pleased that Austria was the host country of BARJAM as a joint document of strategic cooperation between Iran and the P5 + 1 in achieving peaceful nuclear cooperation.", he added.

Referring to the differences and distinctions of his country in dealing with Iran with other countries, the Austrian ambassador said: "We are very eager to develop cooperation with Iran, including cooperation in culture and art, and in the upcoming cultural week, three Austrian music artists will perform in Tehran and Kish.

The signed memorandum envisages holding an Austrian exhibition at the Kish Art Center, which, according to the ambassador, will take place in the first half of March 2021.