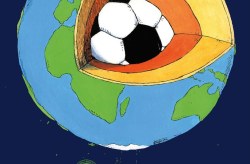 Kish Island, November 14, 2022- One thousand and 736 works of 579 artists from 72 countries of the world have taken part in the International Football World Cup cartoon contest

In this meeting, Masoud Shojaei Tabatabaie, the secretary of the festival, stated that 1736 works of 579 artists from 72 countries have been received so far:” Iranian artists created 600 lasting works in this competition. “He said.

The secretary of the festival emphasized: “the competition in the cartoon section is centered on peace and friendship, and in the caricature section, it is centered on the faces of the players and technical staff of the 32 football teams that have qualified for the World Cup.”

“Iran is the only country among the 32 teams that qualified for the World Cup that has a cultural attachment and has held a competition at the international level. “he stressed.

Referring to the two-thousand-dollar award for the first winner of the competition and one thousand five hundred and one thousand dollars for the next winners respectively in each cartoon and caricature section, he said: “In this competition, five five million Tomans prizes will be awarded to Iranian artists due to their wide participation in International competitions and excellent works presented.”

“The Iranian jury includes Bahman Abdi, one of the well-known figures in the field of cartoons and cartoons, and Sajjad Rafei and Mohammad Rezadoost Doost Mohammadi, and the executive secretary of this event is Abbas Ghazi Zahedi. The foreign referees of this event are Luis Ordonez from Argentina and Angel Veligan from Brazil.”, he added.

“All the works of the participants in the competition will be displayed in the form of exhibition packages in Tehran, Kish Island, and provincial centers,” Shojaei Tabatabai concluded.

In the end, he appreciated the support of Kish Free Zone Organization in the formation of this international event.