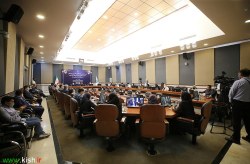 According to the Public Relations and International Affairs Department of Kish Free Zone Organization, Mohammad Reza Navaie Lavasani, the head of Kish Free Zone Organization, described the media as an advisory arm in the public’s problems and the island’s various issues, and helping the officials. After getting acquainted with each of the journalists and listening to their speeches, he explained the strategies and policies ahead.

Some of the topics raised at the meeting were dealing with challenges confronting tourism, facilitating low-cost travel to Kish, combatting the spread of fake news, solving livelihood issues, and high housing and rent costs, especially the labor force.

Monitoring auctions and tenders, formulating media policies, completing semi-finished projects, reviewing and monitoring the performance of Kish Free Zone Organization’s departments, especially tourism, and reclaiming Kish Airlines were among other issues raised in the meeting of the KFZO head with reporters.

Investigating and solving the problems of water and power plants, reducing administrative bureaucracies, direct interaction of media officials and members, creating a platform for international flights to attract health and sports tourists, paying particular attention to the medical sector and Kish entrepreneurs and investors affairs were among other demands of journalists as representatives of the people in this meeting.