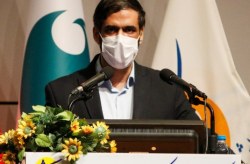 Kish Free Zone, on the Verge of Major Transformation

Kish Island, November 14, 2021- The President's Advisor has described the appointment of Mohammad Reza Navaie Lavasani as the head of Kish Free Zone Organization as a significant change in the field of investment in this region.

At the beginning of the ceremony, while appreciating the meritorious services of Jafar Ahangaran during his tenure, Saeed Mohammad said: "He is an experienced manager and familiar with the free zones, and we will use his experiences in the secretariat of the High Council of Free Zones."

Congratulating Mohammad Reza Navaie Lavasani as the new head of Kish Free Zone Organization, he said: "He has valuable records in the fields of economy, investment, job creation, and mega projects, and this will lead to a change in the investment sector of Kish."

He stated that the free zones of the country were established with the aim of investment, job creation, production, and solving the problems of the mainland, adding: "In the past few years, with the assessments that have been done, show that they had the lowest indicators in this field."

Referring to the Supreme Leader's emphasis on creating change in the free zones, Saeed Mohammad added: "We must use the existing capacities to implement the transformation plan in the free zones."

According to Saeed Mohammad, using indicators, careful planning, and diplomacy, we can evaluate the type of performance of managers.

In this ceremony, Saeed Mohammad stated that in the previous trip, the problems and issues raised by the people of the island were examined, and with the necessary planning in the next trip, we will present a comprehensive report to solve the problems of the natives and people of this region.