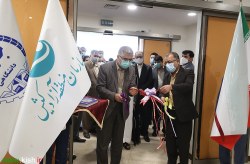 According to the Public Relations and International Affairs Department of Kish Free Zone Organization,  Jafar Ahangaran, the interim CEO of Kish Free Zone Organization, stressed the importance of supporting knowledge-based and creative industries and innovation in the region at the opening ceremony of "The Center for Soft Technologies and Creative Cultural Industries in Kish Central Cultural Center" on Monday evening stating that Kish Island can be the first free zone to become a center for presenting new technologies overseas.

Ahangaran, expressed that the Secretariat of the Supreme Council of Iran's Free Trade, Industrial and Special Economic Zones of the Islamic Republic of Iran pays special attention to cultural and social issues and continued: "The cooperation and interaction of Kish Free Zone Organization with Jahad Daneshgahi has provided ideal conditions for leading companies for presenting new cultural and social services in this region".

According to Jafar Ahangaran, establishing cultural issues and cultural economy on this free zone has been put on Kish Free Zone Organization's agenda.

Meanwhile, Dr. Hamid Tayebi, the president of Jahad Daneshgahi, said that the implementation of operational plans in the field of new technologies is one of the prominent features of the country's free zones, including Kish Island, and added: "Cultural industries shape the world's largest economy and are evolving."

Stating that we should be able to make a significant contribution to the world economy, Tayebi emphasized on the production of quality technologies at the best prices and added: "Kish Island with its capacities and infrastructures can be an important center for the export of new technologies."

Dr. Mohammad Hossein Imani Khoshkhu, the president of the National Park of Soft Sciences and Technologies and Cultural Industries, pointed to Jahad Daneshgahi as the first institution in the field of cultural industries and said: "Cultural Industries town plays a vital role as a tourist attraction and can also create job opportunities in education and production fields.

It is worth mentioning that Kish Central Cultural Center has been built on a 5200 square meter site, consisting of three main sections, including meeting halls, galleries and exhibition spaces, and closed areas for library and cultural products.