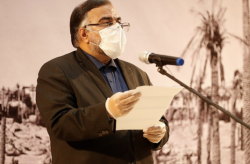 Kish Island, May 26, 2020- The book "A glance at Iran" was unveiled during Ramadan's holy month in the presence of the Austrian ambassador to Iran Stefan Schulz.

According to the Public Relations and International Affairs Department of Kish Free Zone Organization, Josef Polleross' photo book with a look at Iran during the holy month of Ramadan was unveiled at Kish Gallery of Contemporary Art on Saturday, May 23 with the presence of Saeed Pourali, Deputy of Cultural and Social Affairs, Khosrow Neshan, Deputy of Tourism, and several KFZO officials, as well as Stefan Schulz, the Austrian ambassador to Iran, some Artists and residents of Kish Island in compliance with health regulations and social distancing measures.

During the ceremony, Saeed Pourali, KFZO Deputy of Cultural and Social Affairs, referred to the double event, one rooted in Holy Ramadan's long tradition and the other narrating the sacred defense of this holy land and said: "On the last day of the  month of Ramadan, which coincided with the anniversary of the liberation of Khorramshahr, two Iranian and Austrian artists, one by looking at Ramadan and the other by depicting Khorramshahr liberation with their images, have created an atmosphere of intercultural interaction. After Auto Wagner, Josef Polleross looked at Iran through the lens again during Ramadan's holy month.

Also, attending the ceremony, Stefan Schulz, the Austrian Ambassador to Iran, said that the photographic works of "Josef Polleross" were inspired by Ramadan's atmosphere in Iran. "The works of the Austrian photographer illustrate the impact and uniqueness of the holy month of Ramadan."

The Austrian Ambassador to Iran appreciated the valuable support of Gholamhossein Mozaffari, the CEO of Kish Free Zone Organization, and praised the holding of the photography exhibition on Kish Island.

The Austrian ambassador to Iran, as the first international guest on Kish Island after the spread of Coronavirus, considered 700 years of documented contacts, 500 years of cooperation, and 160 years of diplomatic relations between Vienna and Tehran, as well as 60 years of Austrian Cultural Forum in Tehran, to be a sound basis for further strengthening cooperation between the two countries.