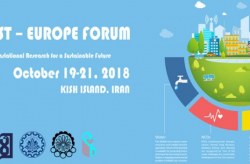 Kish Island, October 23, 2018- MEEF professors and foreign Guests have hailed the development process of Kish Island to turn to the hub of international scientific conferences.

According to the Public Relations and International Affairs Department of Kish Free Zone Organization, on the sidelines of the Middle East-Europe Forum, attended by over 250 prominent national and international scholars, researchers and key stakeholders in the fields of water, environment and energy at Kish International Conference Center, Gunnar Norstedt, the Swedish Professor of Sultan Qaboos University in Oman, rated the conference level as excellent and added:" The conference facilities are excellent and the level of the conference is high."

"In my opinion, Kish Island is a great location in the Middle East that is easy to travel to, of course, better planning is needed to facilitate buying tickets to Kish," he said.

He argued that it's much easier to collaborate in the field of medical research, because political issues are not involved, "It's just to do something to improve health and that is not controversial," he added. " It's an important initiative, it's always good to meet scientists and see what one can do, but maybe in particular right now it's very important that out scientists get to know Iranian scientists and vice versa," he said.

Another foreign participant of the conference, who traveled to Kish from Athens in Greece and has a consultancy firm which is dedicated to promoting the cooperation in science and technology between Europe and countries outside Europe commented on the level of the conference and said: "The organization of the conference is very smooth, the place here is very pleasant, the facilities are excellent, and the meeting room and auditorium are excellent."

He added:" For the content, it's a very unique approach, because there are five universities self-organizing and inviting for this event, which is at the same time regional, Middle East but also a cooperation with EU, it's also a challenging approach because there are different disciplines, different countries involved, different mentalities, we are in a critical point because we have seen all the presentations, now we need to come up with some conclusions.

About the capacity of the island of Kish to hold such conferences in the future, he said: "There is certainly a good capacity, and Iran is very well-organized in holding such conferences. I know that there is an annual conference on innovation that was held in Tehran last year and earlier in Kish. In other words, Kish Island already has a record of holding many international meetings."