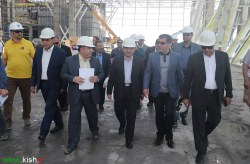 Kish Turns into an International and Regional Aviation Hub

According to the Public Relations and International Affairs Department of Kish Free Zone Organization, Dr. Ansari Lari made the comments during a visit to the southern runway construction project along with a number of KFZO officials.

"The southern runway is one of the most important and crucial infrastructures for Kish island," he reiterated.

"By carrying out this project, one of our top goals which is turning the island of Kish into a regional and international hub will be achieved," Dr. Ansari Lari added.

He also described the airport southern runway, the new terminal, and refueling tanks as three infrastructural projects that will turn Kish Island into a region for the transit of passengers to destinations in Europe and Southeast Asia, which is of great importance.