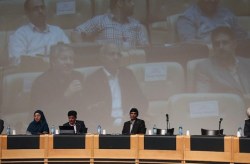 Kish Island, October 25, 2016- The Persian Gulf island of Kish has been introduced as a pilot for implementing marine technology tourism during a seminar on marine tourism investment opportunities.

According to the Public Relations and International Affairs Department of Kish Free Zone Organization, the seminar was held on the sidelines of the 18th edition of the international Conference on Marine Industries which was held at Kish Convention Center.

During the seminar, Abdolkarim Razazan, a senior advisor to the director of Iran's Ports and Marine Organization, highlighted the significance of marine tourism and said people are getting more familiar with marine culture thanks to the scientific advances in the tourism sector.

He said developing the required infrastructure is the key to promoting marine tourism and expressed the hope that more foreign investment can be attracted during the post-sanctions era to boost marine tourism.

Farshchi also pointed to the economic advantages of marine tourism and said the industry can reduce Iran’s reliance on oil and gas revenues boost the country’s GDP.

Hassan Reza Safari was one of the other keynote lecturers of the seminar. The director of Iranian Rating Institute pointed to the challenges facing marine tourism in Iran and said developing the industry needs a unified approach.

In the meantime, Mohammad Saeed Seif, the Head of Commission of Developing Knowledge-based Industries of President’s Deputy for Science and Technology, said given its vast coastlines, Iran has a great potential for boosting its marine tourism.

He pointed to marine tourism projects to be implemented in Kish Island and said building a recreational submarine and a marine restaurant are already on agenda.