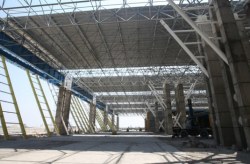 According to the Public Relations and International Affairs Department of Kish Free Zone Organization, the runway has been specifically made for the landing of A380, a wide-body aircraft manufactured by Airbus Company.

Kish Free Zone Organization has already carried out a large number of aviation projects as part of efforts to boost tourism services in the Persian Gulf Island.

Developing the airport infrastructure, facilities, and services and achieving international aviation standards have topped the agenda of KFZO over the past three years.

Construction of a new control tower at Kish International Airport is one of the other major projects carried out by KFZO in recent years.

Meanwhile, the lighting system at Kish International Airport has been improved as part of measures to boost the safety of the passengers.

Thanks to its modern management system, Kish International Airport has been ranked as the most satisfying airport in Iran.