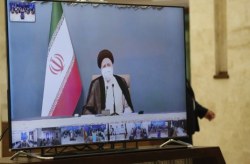 President in the inauguration ceremony of 82 industrial and development projects:

Kish Island, May 21, 2022-The President described the philosophy of establishing free zones in Iran as the optimal use of the existing capacities for "production, employment, and economic activities" in these zones.

According to the Public Relations and International Affairs Department of Kish Free Zone Organization,speaking on Thursday at the ceremony of simultaneous operation of 82 industrial, civil, and agricultural projects of the Supreme Council of Free, Commercial, Industrial, and Special Economic Zones, Ayatollah Dr. Seyyed Ebrahim Raisi expressed hope that these plans and measures bring about production, employment, and entrepreneurship with a focus on science and technology for the people.

The President added, "The philosophy of establishing free trade zones is to make the most of the existing capacities for production, employment, and economic activities. This goal has been neglected at times, and some free zones have become places for imports, while these areas are the best opportunity for exports".

Dr. Raisi emphasized high standards and quality as essential features of manufactured products in free zones and stressed, "The presented reports promise that free and special economic zones have approached their main philosophy of production, employment, entrepreneurship, and capital attraction."

"Domestic and foreign investment and increased productivity are the two basic conditions for economic growth," the President said.

Ayatollah Raisi described it as necessary for the private sector to be active in the country's economic field and stated, "The presence of the private sector, investment of banks and large companies in the economy is one of the successful steps that must be strengthened."

Referring to the report on the employment of 8,000 people in the projects inaugurated today, Dr. Raisi said, "I am delighted to hear such news in a year decorated with " Production, knowledge-based, job-creating." slogan.

The President referred to the need to use domestic human resources in free and special economic zones and said, "The activities of free zones are generally near the borders. We have many efficient and educated human resources in different country regions that can be used in plans and projects. Still, the priority is to attract efficient and local forces in each region".

Referring to the legal powers of the heads of free and special economic zones, Ayatollah Raisi said, "Apart from every authority and the right given to managers, there must be accountability, and every manager must be accountable for the duties and responsibilities he has."

The President stated, "In the seventh development plan, the position of free and special economic zones should be redefined according to the day's requirements."

Referring to the importance of tourism development in free and special economic zones, the President stressed, "Creating employment and increasing exports is not in conflict with the tourism industry in these areas."