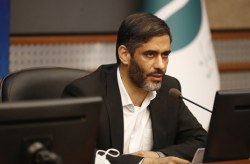 Kish Island, April 10, 2022-The Adviser to the President and Secretary of the Supreme Council of Free Trade-Industrial and Special Economic Zones considered the Qatar World Cup event an excellent start to turn Iran, especially Kish and Qeshm Islands, into a regional hub and said: The primary targeting of Kish is tourism, sports, and health.

According to the Public Relations and International Affairs Department of Kish Free Zone Organization, referring to the previous talks, Saeed Mohammad named the appropriate plans for using the economic and tourism capacity of Qatar World Cup 2022 and said: Based on consultations and presidential follow-ups with Qatar, Qatar's transport minister is coming to Kish to carry out the coordination for tournaments and maximize the capacity of the national team's supporters and players.

The Secretary of the Supreme Council of Free Zones emphasized encouraging investors to invest in water and power sectors and said: "Despite the presence of many Nowruz travelers, no particular problem arose in Kish, but we are trying to solve the problems more sustainably."

Some structural projects have also been prepared and will be inaugurated through video conference in two weeks in the President's presence.

He also expressed satisfaction with the progress of hotel projects, runways and airport terminals, ports, and passenger terminals. He added: "All the items intended for service during the World Cup, including football fields and gyms, are of great importance " The construction has progressed very well to finally have a good reception for this global event.