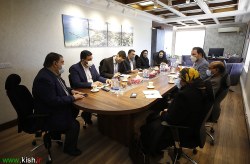 Kish Island, February 9, 2022 -The Commercial Counselor of the Bangladesh Embassy has met with the Acting Deputy Director for Economic Affairs of Kish Free Zone to identify investment opportunities.

According to the Public Relations and International Affairs Department of Kish Free Zone Organization, Hossein Hemmati, KFZO Acting Deputy Director for Economic Affairs, explained the rules and investment opportunities and how to trade in Kish in a meeting on Tuesday, February 8 with Julia Moin, the Commercial Counselor of the Bangladesh Embassy.

KFZO Economic Affairs Acting Deputy Director described the meeting as an excellent opportunity to establish interactions between traders of the two countries and said: "There are some incentives and benefits in the free zones that provide more favorable conditions for investors than the mainland. These include visa-free travel, tax exemptions, and customs incentives for importing goods without special formalities."

Hossein Hemmati also stated that to participate in production affairs, attract Iranian private sector investors and use the equipment, facilities, and technologies associated with the Bangladeshi investor can be a facilitator.

Announcing the readiness of KFZO in the field of maritime trade, the head of the economic deputy of Kish Free Zone stated: "We welcome and support any related proposals, and facilities and infrastructure will be provided for investors in proportion to the volume of commercial work."

Hossein Hemmati also pointed out that Kish Airport is the third largest airport in the country and said: " Kish and Bangladesh can also have good trade cooperation with the Gulf countries by air."

"I hope that such a series of negotiations will have a good outcome, and positive interactions will be done with the synergy of both sides," he concluded.

Meanwhile, Julia Moin, the Commercial Counselor of Bangladesh Embassy in Tehran, also stated that the volume of trade relations between the two countries is very small and emphasized the expansion of interactions, saying that Bangladesh has the fastest economic growth in South Asia and the tenth most significant economic growth in the world.

Referring to some of the economic potentials of Bangladesh, she said: "Bangladesh ranks second in the world in readymade garment exports and third in vegetable production. Also, it is the fourth-largest rice producer and ranks third among the world's largest inland fish production."

The Commercial Counselor of the Bangladesh Embassy mentioned the production of jute, medicine, tropical fruits, textiles, food and beverage industries, electronic items, and RMG production and textile machinery as some of the best investment options available in Bangladesh.

In the end, she called for more contacts and meetings with Kish economic officials and a visit to the industrial town of this free zone.

It is worth mentioning that in this meeting, it was decided to provide the ground for bilateral visits to Kish and Bangladesh in the form of tours for a delegation of traders to become more familiar with the conditions of industrial estates, prices, and capacities.