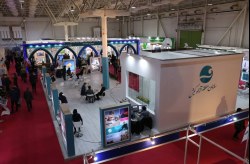 According to the Public Relations and International Affairs Department of Kish Free Zone Organization, During the meeting, Jamali, Deputy Minister of Tourism of Kish Free Zone Organization, emphasized the development of Kish-Kyrgyzstan relations, especially in tourism sector, and described Kish as one of the attractive and proper destinations for Central Asian tourists.

Saygin Beck, the representative of the Kyrgyz consulate in Iran, called Kish Island one of the most beautiful islands in the Persian Gulf and stressed its investment potential, saying that Kyrgyzstan and Kish could have an outstanding interaction in the field of tourism.

" Kyrgyz people will invest in the beautiful island of Kish if they know about it," he said, "We are aware of the tourist attractions of Kish Island due to our activities in Iran, while many countries in the Central Asian region are not familiar with Kish Island." he continued.

He further referred to the existing capacities in Kish Island: "There are facilities such as domestic and international tourism investment and other facilities in this free zone that other foreign countries should consider.", he added.