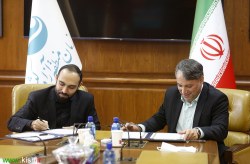 Kish Island, January 19, 2022-A memorandum of understanding was signed between Kish Free Zone Organization and the Tennis Federation of the Islamic Republic of Iran to hold the international tournament of the World Tennis Tour on Kish Island.

According to the Public Relations and International Affairs Department of Kish Free Zone Organization, this memorandum was signed to hold the "Women’s and Men" National Cup Tennis Tournament and the international tournament of the Under-18 World Tennis Tour on the tennis courts of Kish Island in the Olympic Complex.

During the meeting, Mohammad Reza Lavasani stressed the need for the importance of existing capacities and infrastructure to hold sports events that will cause the prosperity of Kish Island and the need to conclude such memorandums.

Also, in the meeting, Davoud Azizi, the President of Iran Tennis Federation, said that holding the tournaments on Kish Island and concluding a memorandum of cooperation in tennis has been an important step in developing sports in the region.

The memorandum will remain in force until February 6, 2022.