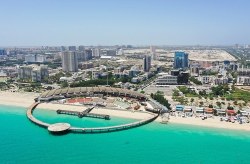 According to the Public Relations and International Affairs Department of Kish Free Zone Organization, the proximity of Kish to Qatar and the lower cost of staying on this island make it possible for spectators and teams to stay here during the World Cup, to be held November 21 to December 18, 2022, ISNA quoted Masihollah Safa as saying on Monday.

Referring to the limited tourism capacity of Qatar, as well as the statements of the Secretary of the Supreme Council of Free Zones to receive some of the passengers of the 2022 World Cup in Kish and Qeshm, he said: Due to the significant leap taken by the Iranian national football team to participate in the World Cup, there is a need to increase the capacity of accommodation and reception services on Kish Island.

Therefore 4,000 rooms are being prepared to accommodate Iranians and foreigners attending the World Cup, he added.

The goal is to increase accommodation capacity and standards on Kish until the World Cup to provide at least Iranian travelers with reasonable prices and a far better experience than Qatar, he noted.

Regarding the standardization of services in Kish accommodation, he said: Recently, the president of the Iranian Football Federation and the FIFA representative visited Kish's assets and capacity, which prompted us to prepare our accommodation capacity by September 2022, before the World Cup begins.

Saeed Mohammad, the Secretary of the Supreme Council of Free Zones, recently announced readiness to participate in hosting part of the 2022 Qatar World Cup on Qeshm and Kish and said: Due to Qatar's limited capacity in hosting the 2022 World Cup, tourists and travelers, we have a complete plan to make the most of the existing capacities in Qeshm and Kish, so that the tourists leave the region satisfactorily.

Since Qatar was announced as the host 2022 FIFA World Cup, officials, especially private sector activists and investors, have sought to participate and host part of the global event.

Due to the unfavorable condition of football fields and stadiums in Kish and the tough competitors such as the UAE, Kuwait, Oman, and even Saudi Arabia to participate and host a part of the World Cup, conditions have become more competitive for the Iranian islands.