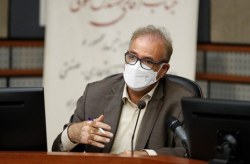 Kish Island, April 24, 2021- Establishing an offshore financial center, implementing a comprehensive plan for the development of Hendurabi Island, and establishing a multidisciplinary financial holding to connect to the capital market are among the main projects of Kish Free Zone Organization in the next five years.

According to the Public Relations and International Affairs Department of Kish Free Zone Organization, in the induction ceremony of Jafar Ahangaran, CEO of Kish Free Zone Organization, held on May 22, in the presence of Hamid Reza Momeni, Advisor to the President and Secretary of the Supreme Council of Free Zones at Kish International Conference Center, Nasser Akhoondi referred to the 2 to 3 billion tomans liquidity of KFZO, and its readiness to implement development projects in the region and said: " Kish Free Zone Organization's extensive efforts to provide financial resources in new ways and investment in various projects has so far brought 8500 billion tomans of added value for it, which is a valuable achievement in the development of Kish.

Regarding the 5-year plans of Kish Free Zone Organization, KFZO's Deputy Director of Management Development stated: If the conclusion of international agreements per national interests provides the ground for establishing an offshore financial center in the region, the necessary arrangements will be made to establish and launch an exchange International and we will witness a significant change in the field of trade and foreign exchange transactions on Kish Island.

According to Akhundi, financing various tourism and commercial projects, offering shares of domestic companies in international stock exchanges, and establishing extensive financial relations with the world's major monetary centers are other advantages of setting up an international exchange in Kish.

He also announced the registration of Hendurabi Investment and Development Company with an initial capital of 5,000 billion Tomans and the participation of several capable companies and operating banks and stated: "Hendurabi comprehensive plan has been prepared with the cooperation of experienced consultants and with a tourism approach. Its implementation, while increasing investment attraction, will lead to economic prosperity in the region and the country."

The establishment of a multidisciplinary financial holding to connect to the capital market was the third program mentioned by the Deputy Director of Management Development of Kish Free Zone Organization, "Establishing a public joint-stock company as a multidisciplinary financial institution not only provides the basis for offering shares of regional companies on the stock exchange and determines the current value of their assets; it also makes it possible to finance projects by providing only 10% of the companies' shares on the stock exchange from their total capital. Besides, the management and supervision of capital will be at the disposal of the company.

"By establishing this holding, we can allocate its shares to the employees of organizations and subsidiaries to benefit from its profits," Akhundi added.

The purchase of a part of the shares of Kish Water and Electricity Company by Kish Free Zone Organization to strengthen the infrastructure of the energy sector and solve the problems of the residents was another point mentioned by the Deputy Director of Management Development. He also expressed the hope that with the implementation of this plan, the water and electricity problems of Kish Island's residents and tourists will be solved forever.