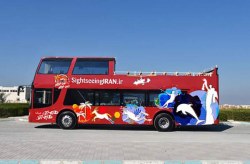 According to the Public Relations and International Affairs Department of Kish Free Zone Organization, the new service will be operated by Gasht o Gozar Asan Kish Co., by launching special sightseeing buses called "Hop-on Hop-off." Amir Ghaffarpour, the investor and managing director of the company, said: "Tourists and travelers can use this new tourist service in Kish many times within a ticket's period of validity, and hop on and off at any of the 23 stops along the route."

He added: "The buses are equipped with pre-recorded credit commentary guides in three languages; Persian, English, and Arabic, as well as tour guides, and its tickets are valid for 24, 48, and 72 hours, which allows the tourist to adjust the itinerary as they wish. And get the most out of Kish "Hop-on Hop-off buses."

According to Ghaffarpour, two open-top double-decker buses will be launched on Kish Island on March 10, and two more buses will be added to this tourist route early next Persian year.

More than 130 main cities worldwide use Hop-on Hop-off tourist buses, and they have been provided on Kish Island as the first city in Iran.