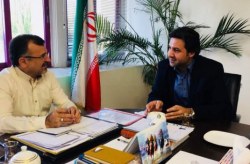 According to the Public Relations and International Affairs Department of Kish Free Zone Organization, A common meeting between Mahmoud Afshardost, the CEO of Kish Sports and Recreation Inistitue and Mohammad Davarzani, Iran’s deputy sports minister, was held covering the issue of hosting international tournaments on Kish Island.

It is to be mentioned that Kish Island will host several international events and tournaments including the $ 15,000 ITF Men’s Futures Tennis Tournament, World Taekwondo Championships, Fajr Cup and President Cup in the second half of the year.