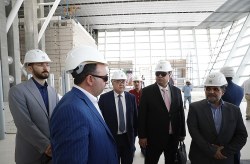 According to the Public Relations and International Affairs Department of Kish Free Zone Organization, during this trip, Iyad Kousa, the Director of General Establishment for the Syrian Free Zones, visited the sixth industrial phase, the commercial port, and the new terminal of Kish International Airport.

The Director of General Establishment for the Syrian Free Zones stated: "Just as Iran is active in many industries and products, Syria also has special skills in the industries, especially textiles, and is famous; and I hope that we will witness acceptable interaction and cooperation in the fields of industry and trade between the two countries."

"Along with trade and investment discussions, the issue of tourism is also of special importance to us. We want the Syrian people to have a share of Kish tourism, and tourist exchange is another program of the free zones of the two countries," Kousa continued.

Regarding implementing some programs, he said: "The process of cooperation between governments has always been in the form of legislation, and to implement it, private sector investors must implement these laws."

Kousa also called for discussing the opening of an Arab restaurant and a permanent exhibition of Syrian products in Kish and declared his readiness to introduce Syrian investors to the capabilities of this free zone.

It is worth mentioning that Mohammad Chaloui, the Acting Deputy Director of Economic Affairs and Investment of Kish Free Zone Organization, was also present during this visit.